From eneutrons
Jump to: navigation, search

Neutron scattering is one of the most powerful and versatile experimental methods to study the structure and dynamics of materials on the atomic and nanometer scale. Quoting the Nobel committee, when awarding the prize to C. Shull and B. Brockhouse in 1994 for the invention of neutron scattering, these pioneers have "helped answer the question of where atoms are and ... what atoms do".

Neutron scattering is presently used by more than 10,000 researchers worldwide, and the scope of the method is continuously broadening. In the 1950's and 1960's, neutron scattering was an exotic tool in Solid State Physics and Chemical Crystallography, but today it serves communities as diverse as Biology, Earth Sciences, Planetary Science, Engineering, Polymer Chemistry, and Cultural Heritage. In brief, neutrons are used in all scientific fields that deal with hard, soft, or biological materials.

It is, however, appropriate to issue a warning already here. Although neutron scattering is a great technique, it is also time-consuming and rare. Neutron scattering experiments last from hours to days and are performed only at a few handfuls of large international facilities. Here, access to measurement time is very competitive, and the running costs correspond to typically 10,000 Euros per instrument day. Hence, neutron scattering should be used only where more accessible methods are inadequate.

For the study of atomic and nanometer-scale structure in materials, X-ray scattering is the technique of choice. X-ray sources are by far more abundant and are, especially for synchrotron X-ray sources, much more intense than neutron sources. Hence, the rule of thumb goes: "If an experiment can be performed with X-rays, use X-rays". For an introduction to X-ray scattering, see, e.g., the excellent textbook by D. F. McMorrow and J. Als-Nielsen[1].

However, neutrons have a number of properties that make them extremely useful for purposes where X-rays are insufficient. This chapter will present these properties and describe essential differences between neutron- and X-ray-scattering.

Basic properties of the neutron

The neutron does not exist naturally in free form, but decays into a proton, an electron, and an anti-neutrino. The neutron lifetime, \(\tau = 886 {\rm \,s}\)[2], is much longer than the time a neutron spends within a scattering experiment, which is merely a fraction of a second. Hence, neutron decay can typically be neglected in experiments.

The neutron is electrically neutral but still possesses a magnetic moment

The neutron interacts with nuclei via the strong nuclear force and with magnetic moments via the electromagnetic force. Most of this text deals with the consequences of these interactions; i.e. the scattering and absorption of neutrons by atoms and nuclei inside materials, as well as reflection from surfaces and interfaces.

To be more specific on the wave nature of matter, a particle moving with constant velocity, \(v\), can be ascribed a corresponding (de-Broglie) wavelength, given by

In neutron scattering, the wave nature is often referred to in terms of the neutron wave number,

or the wave vector of length \(k\) and with same direction as the velocity: 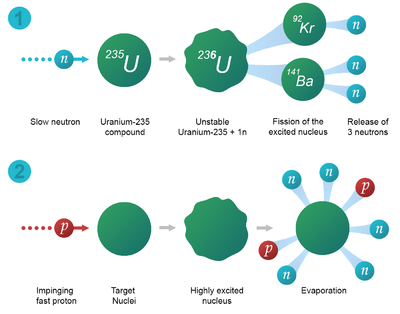 Figure 1: The two main methods of neutron production. 1): Traditional nuclear reactors make use of production of neutrons for maintaining the chain reaction; surplus of neutrons can be used for neutron scattering. 2): Protons accelerated into the GeV regime can split heavy nuclei with a large neutron surplus, creating free neutrons among the reaction products.

Neutron sources with flux densities adequate for neutron scattering investigations of materials are based on one of two principles, also illustrated in Figure 1:

Common to both types of sources is that neutrons are moderated to "thermal" or "cold" velocities close to the source and then transported to the neutron scattering instruments in neutron guide systems. For the conventional naming of neutron energy intervals, see Table 2.

Both fission and spallation neutron sources are built as dedicated facilities, each hosting tens of instruments. All major sources are user facilities, meaning that they serve a research community much larger than the staff affiliated with the facilities. Typically, user experiments are selected through a competitive proposal system.

At the time of writing, more than twenty neutron facilities are in operation worldwide. The most important being the reactor source ILL, Grenoble, France, and the spallation source ISIS, Oxfordshire, UK. However, the traditional European dominance in this field was in the late 00's challenged by the new and powerful spallation sources: Spallation Neutron Source SNS, Oak Ridge, USA, and Japan Proton Accelerator Research Complex J-PARC, Tokai, Japan. For this reason, it was in 2009 decided to build the European Spallation Source (ESS), in Lund, Sweden. After some years of preparation work, the actual construction was initiated in the summer of 2014. The source is expected to be operational in 2022, with first user experiments ultimo 2013, and to reach full power with 16 running instruments in 2028[1]. 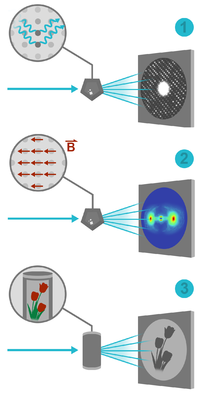 Figure 2: Illustration of three of the ``five reasons for neutron scattering. 1) shows a diffraction experiment that reveals the positions of the individual atoms in a crystal of the material, 2) shows a small-angle scattering experiment on tiny magnetic particles. From the pattern is can be deduced how large the particles are and which way the magnetic moments point (in this case vertical) (!), 3) shows a transmission (or imaging) experiment, where a rose is revealed inside a metal container, showing the neutrons' ability to penetrate many materials (but not hydrogenous ones).

In the later parts, we will describe the actual applications of neutron scattering. For each case, we give the scientific motivation and the relevant corresponding description of the scientific field. We then proceed to the theory for that particular type of scattering, a score of illustrative examples on scientific use and data analysis, and a number of relevant problems.

The final part VI contains an introduction to neutron ray-tracing simulations, often used for instrument design and for simulating the effect of the combined geometry of neutron scattering instruments. Here, however, they are also used to form the basis for a number of working problems shaped as "virtual experiments", where the student of these notes may investigate a problem in neutron science or instrumentation by means of simulations [1].

The text is intended so that after the introduction in part I and part II, each part can in principle be studied independently. However, the parts IV and V rely to a minor extent on basic results from part III. Part IV forms the basis for the simulation problems, but requires only knowledge of part II.

The reader is assumed to have a general knowledge of classical physics and complex numbers for the description of waves, and a general knowledge of mathematics, corresponding to first year curriculum on most university educations in Physics, Chemistry, and Engineering. The main chapters of the text assumes very little knowledge of quantum mechanics. At places where a deeper quantum mechanical presentation could be elucidating for some students, there will be follow-up sections containing the formal derivation of the results. These sections can be omitted without essential loss of contents; they are marked by an asterisk (*).

In later version of this note, we aim to include a number of other utilizations of neutron scattering, like single crystal diffraction, and scattering from liquids.

More advanced topics, like a detailed account of scattering with polarized neutrons, analytical calculations of instrumental resolution, and the production and use of ultracold neutrons will be written in one or more extensions to the notes.